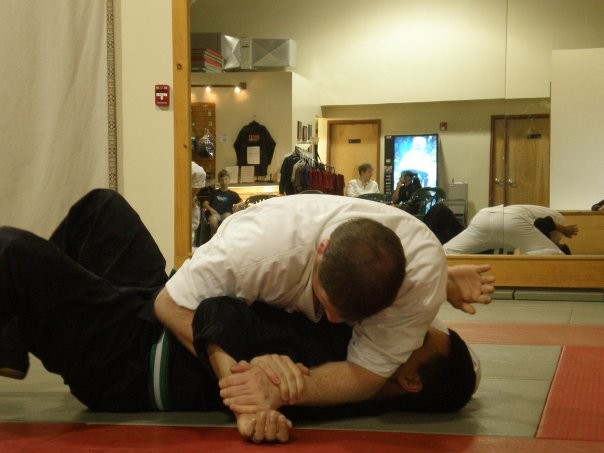 Yes, there is something you need in your training if you want to walk away from an attack without looking like this:

You need to train properly for it. That means injecting reality into your training. Makes sense, right?

Like many kids who grew up watching Bruce Lee movies and reading his books, I learned to appreciate his blend of philosophy and pragmatism regarding martial arts training. As I have matured as a martial artist, I want to discuss what I love and hate concerning a popular quote from him that I and many other martial artists and fighters can appreciate:

“If you want to learn to swim jump into the water. On dry land no frame of mind is ever going to help you.” – Bruce Lee

The occasional industry abuse of this observation (more on that later) does nothing to downplay its importance. There are many mental and emotional skills tied to fighting ability. Effective self defense is not only a matter of physical technique; in fact, your psychological and emotional skillset can impact a fight more than your technical ability, as it often gives rise to what will actually physically happen. I could list many examples of skills that aren’t simply taught by techniques, including:

There are many more emotional and psychological components to effective fighting and self defense. Now, what am I rambling about here and why is it important? 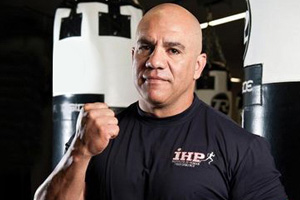 Don’t give JC access to resistance bands… you’ll regret it.

I was lucky to spend the summer of 2009 training athletes at Boca Raton’s Institute of Human Performance (IHP). I got to work with many fantastic combat athletes, including two time Abu Dhabi Grappling champion Jeff Monson. Athletes may recognize the name J.C. Santana, who is regarded as one of the worlds foremost trainers for athletes, owner of the IHP, and a pioneer in the world of functional training. In the athletic world, we have a principle termed “sport specificity.” This principle states that your training should be relevant to the skills most appropriate to your activity in order to create the strongest training effects. Santana and his staff consistently applied this principle across a multitude of sports and activities, and I think that principle stands for self defense too. I was lucky to be immersed in such an environment.

The connections between Bruce’s swimming maxim and the principle of sport specificity are readily apparent. Learning technique in martial arts is important; effective weight use, angling, distance, timing, leverage, etc… all of these technical elements will greatly effect the efficacy of your fighting. However, without effective mental and specifically emotional training, your technical skills will flow about as well as water trapped behind a dam. The fear and uncertainty of real fighting, combined with the very real threat of pain and injury can quickly overwhelm your ability to perform the techniques you have trained to develop. To succeed with our self defense training, we have to acknowledge this requirement and adjust our practice to account for the chaotic psychological elements of fighting; in simpler words, emotional training is highly specific to self defense, and what you train will be what you can do.

This is not easy, and it is not instantaneous. It requires a certain level of training intensity, which as Mark White has discussed, is a personal choice. It also requires a broad period of study (read: years), and everyone starts at a different point in that process, with their own unique blend of abilities tied to their ability to defend themselves in a real situation. This challenge calls for a progressive model of practicing against increasing levels of resistance and uncertainty if we want to truly develop the critical emotional and fighting skills necessary to make good technique happen in a real crisis. Luckily, we can break down the specific skills needed and develop training progressions that help us develop these skills from simple decision making through full on fighting. The following is an example of a progression we may follow at the dojo using a knife defense:

Here we would work on developing the basic movement and coordination required to perform the technique. Very little if any emotional investment made for either the attacker or defender. This is often used when discussing a critical detail to a technique, and is often accompanied by slow movement and critical feedback and correction. In this case, perhaps the attacker attempts a basic stab to the torso, during which the defender steps outside and executes an omote-gyaku wrist break. For beginning students, we may break this technique into two parts to study the technique closely. 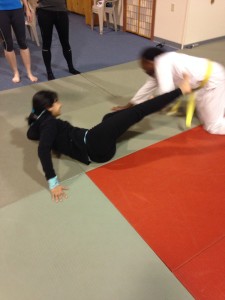 Steve and a MTC member showing some increased training intensity

This is where we would ask the attacker to demonstrate more commitment and intent concerning the stab. You may hear more noise, see different facial expressions, and the attacker may accelerate faster instead of moving at a constant speed. This is now requiring the defender to read the signals the attacker is giving without instruction (critical to timing development) while also beginning to deal with unexpected acceleration or deceleration of the technique. We typically begin a lot of new techniques at this intensity level and adjust appropriately from there.

We would ask the attacker to commit much more fully to the technique, becoming louder, faster, and putting the pressure on the defender to succeed. The speed increase alone can begin to cause significant technique breakdown unless there is training being done at this level. Oftentimes, a defender will show inefficiencies in timing, distancing, position, and general technique placement unless they have some sufficient training in this area.

There are many ways to add uncertainty to the situation. We may ask the attacker to move about, and potentially even fake a couple of attacks to generate flinch responses. There will be significantly higher tension and anxiety in untrained students vs. students who have done much training like this. This phase brings students much closer to the kind of anxiety and uncertainty faced when dealing with a potentially or actively violent person. Much technical and emotional coaching can be done in this area as technique breakdown will certainly occur without adequate training. This is teaching the student to maintain balance and movement despite anxiety, incorporating such physical skills as proper breathing, joint relaxation, and prompt movement.

We move on to show the defender a response to a torso slash vs. a stab by having the move inside for wrist control, moving through three or four of the last described phases. We then assign to the attacker to attack with either a stab or a slash, without announcing which it will be. This is a world of difference for a defender, who know needs to access many skills to be successful, from reading an opponent’s intention and movement to developing the confidence to act with commitment (a “halfway” response typically leads to a bit of poke in the ribs.) Many students need a lot of time training in this phase to demonstrate consistent success. This is where many student need to train to over come the “freeze” state of “fight, flight, or freeze.”

After significant training in the previous phases over a variety of techniques, students can begin to demonstrate real mastery over the situation. We would allow attackers to start at a moderate pace, and deliver any attack they wish. some safety equipment (gloves, mouthguards, etc.) come recommended. The defender must read and respond to the attacker’s movement in what will feel like an inordinately short period of time. They may choose how to handle the situation; aggressive, forward moving early techniques, defensive and scientific movements, or even harrowing, slippery body movement. Randori can be performed at many levels of intensity as attackers modify their speed, level of commitment, “trickiness”, etc. Defenders no longer have the luxury of “thinking” their way through techniques; they have to show a lot of skill in staying level headed and skillful to show frequent and replicable success. This is a required skill for anyone wishing to achieve shodan (first degree black belt) rank. Here are two of our black belts, Nick and Dan, demonstrating this skill:

There are many arts and/or schools and/or martial artists that do not train in this phase. Simply, the attacker will be 100% committed to winning and “killing” the defender. This training is difficult for martial artists of any level; this is where we tell people to “expect to get cut.” This is not the level of training suitable for new or budding students; that’s a path to near certain injury and the development of poor habits. However, this kind of training can help a student overcome some of the last mental blocks required to come out safe in a real self defense situation. It will challenge all facets of a student, in perception, mentality, physical skill, confidence, and more. Some of our best training experiences come out of this; we have trained scenarios in randori class. Creating authenticity is important; I recall dressing up in full coastguard sea gear to practice boarding arrests against fully resistant opponents with weapons (thanks Nate and Greg!) This experience teaches students how hard it can be to pull off stellar technique in real situations, and requires they master the ability to use setups and technique adjustments to perform effectively.

This is an example of one set of progressions we may take to move a student from technical skill to fighting mastery.  There are many ways to develop the physical and psychological skillsets associated with each phase. We have access to a plethora of methods at Discovery. Ninjitsu is a broad art that allows us create many training opportunities for each of the above phases, and train someone in the phase that they need the most. I use the word progression to describe this, but we should also look at this as a pyramid; you can’t expect to succeed in phase 3 if phases 1 and 2 aren’t adequately developed.

I mentioned earlier that I think there is some industry abuse of this reality. The need for realistic training is no excuse to move to what I call the “dark side” of Bruce’s maxim. I’ve met too many students who cite this quote as an excuse to only train at maximum intensity and resistance and not pay heed to the importance of subtlety and technique. This will not help a fighter develop the technical skills required to be considered an effective martial artist in the long run. They may do well mentally in a fight, but will fail against larger and stronger opponents. I used to be a competitive swimmer, and if we’re using swimming as the metaphor, well, the truth was if you wanted to win your events you had to develop your stroke technique too. We’ve all heard the phrase “work smarter, not harder.” I prefer “work smarter, harder.”

For those of you out there looking for the edge in your training, I advise you to design drills that require you test yourself at each phase. It is worth the many failures that go into this process. Depending on your specific study you will be punched, kicked, thrown, stabbed, doinked, bonked, and generally tossed around a bit. That’s good! Hanshi Poliquin will remind us in the face of low success: “If you aren’t ever making mistakes, you aren’t challenging yourself enough.” Martial arts presents us endless opportunities for challenging ourselves. Whether you are new or veteran artist, I implore you to challenge yourself and your training. It will leave you a cut above the rest.

Here’s a short, simple list of some things you can do right now to add a dose of reality to your training:

There are many ways to dose up on reality; How do you challenge yourself in your study?

On Discomfort and How Martial Arts Training Creates Confidence